As in THE PROBLEM with used batch freezers...

BUY “MADE IN THE U.S.A.”
KEEP AMERICAN JOBS IN AMERICA

A Real Gem of a Used Machine - a 60 Year Old Emery Thompson!
Note the flowers; they must be getting it ready for the funeral! 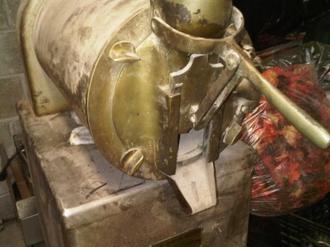 These are real life comments from customers who bought on eBay. We build the world’s best and longest lasting batch freezer, but do you really want to risk the $150,000+ that you’re investing in your new store on an old piece of equipment?? Again, If you are considering purchasing a used machine on eBay, take care - these machines are used and so may not be up to our usual high quality standard. If you want true Emery Thompson quality, BUY NEW!

“My refrigeration man says I need a new condenser coil. This machine was stored in the previous owner’s garage.”
Being subjected to below freezing temperatures,  it froze up the internal workings of the batch freezer – just like a car radiator without anti-freeze. This machine is fully contaminated, the internal pipes are broken and is suitable only as a boat anchor!

“The freezing cylinder frosts up all the way around – except in one spot.”
This is called a “dead spot” – caused by pouring near boiling water into the cylinder to clean it out. A real NO NO in frozen dessert machines. This machine will now take twice as long to produce ice cream or ices.

A long time customer of Emery Thompson called today. He was looking at a used Emery Thompson. He owns a number of Emery Thompson's. I had advised him a month ago not to buy it as the owner could not or would not say how the machine had been stored. He bought it anyway because....what could go wrong......it's an Emery Thompson! What went wrong is the previous owner had left water in the pipes before storing it and when the temp. went below 32 degrees, the pipes froze. When he turned on the compressor, he mixed water and Freon together. If this machine does ever get running, it will take 3-4 months of having the refrigeration man in once  a month to change out the moisture drier. It it ever does run, it will cost him over $5,000.00. He just spent $3,000.00 with me which I advised him against doing.

A man called on Monday and was outraged at me because he bought a used Emery Thompson for a pretty high price. What could go wrong....it's an Emery Thompson. What went wrong is when the health inspector came to give the store the final approval, he found this 1990 Emery Thompson which had dairy metal in it (as did all dairy equipment worldwide at that time) and he red tagged the machine. Now he can never run it and the new Emery Thompson he ordered to replace it is four weeks from delivery...if he doesn't run out of money first.

Used Emery Thompson's are the scarcest piece of machinery in the world. Only the bad ones hit the used market. No my customers do not go out of business and no they don't trade them in - when they add a new Emery Thompson they keep the old one for specialty runs or a second store. My judgment is you do not have an ice cream business or ices business or gelato business without your batch freezer - no matter who made it. So why would you risk the 100 or 200 or $300,000.00 investment you made in your business over the only piece of equipment that stands between you being in business or not. I'd rather see you buy a new Carpigiani or Taylor than buy a used batch freezer of any make, including mine.

Am I harsh on this subject?You bet, and with good reason!

I am convinced that eBay is the place where you sell all that junk your wife told you to get out of the garage - Buyer Beware! No, we’re not selling batch freezers on eBay. If you are considering purchasing a used machine on eBay, take care - these machines are used and so may not be up to our usual high quality standard. If you want true Emery Thompson quality, BUY NEW! Here are some stories that we’ve heard from customers who bought used Emery Thompson Batch Freezers on eBay.

A woman had an old batch freezer (vintage 1940) that had just plain worn out. She tried a new Italian made machine built by a company with an American name. It just wouldn’t produce her style of ice cream.  She called us for help.  We convinced her that the way to go was with an Emery Thompson. She then proceeded to buy a 1980 machine on E bay. She bought it sight unseen and not even knowing what the operating voltage requirements were. Would you buy a used car without at least kicking the tires??

Another customer called us and said “The beater is missing.”
That’s the heart of the machine. They never wear out. But, the replacement
part for this customer will cost $4,700.00

We often hear “This machine looks great!”
The only problem is the age of the machine - It left our factory brand new in 1949

“Only used one season”
Problem here it’s been in someone’s garage for the past 16 years! And why would you put a “perfectly good” piece of machinery in your garage for all that time?

“I’ve had it for six years”
Yeah, but how long did the person you bought it from have it?

“The machine I bought is Three phase electric. How do I convert it to single phase?”
You need to buy a new drive motor, a new condensing unit, new electric starters and contactors and then have an electrician rewire the entire machine. Single phase will run anywhere in America. Three phase will only run at three phase locations. Phase converters DO NOT work on our batch freezers due to the very large motors we use and the increasing load on the motor as you make ice cream or ices.

CAUTION! IF THE BATCH FREEZER (ANY BRAND) YOU ARE CONSIDERING BUYING USED WAS BUILT BEFORE 1996, IT IS NOT IN COMPLIANCE WITH NEW FOOD AND DRUG ADMINISTRATION (FDA) GUIDELINES.

OLD ICE CREAM MACHINES WERE BUILT WITH AN INDUSTRY APPROVED METAL CALLED “DAIRY METAL OR WHITE METAL.”  DAIRY METAL IS A STAINLESS MATERIAL BUT IT CONTAINS UP TO 5% LEAD FOR STRENGTH. EMERY THOMPSON REMOVED THIS METAL FROM ALL ITS MACHINES OVER 15 YEARS AGO.

We do not recommend your purchasing someone else’s used machinery. Like a used car, you don’t know how it was handled or maintained. A used machine does not come with any kind or warranty, training or factory support. Just like buying a used car, it may look good on the outside, but you don’t know anything about how it was treated! You certainly wouldn’t buy a used car without driving it and having it checked out by a qualified mechanic! Would you buy a used batch freezer from a photograph on e-Bay and with some stranger’s word that “it’s in great shape?” Of course not! Your batch freezer is the very core of your business operations. It doesn’t make good business sense to gamble your $200,000.00 business on an old, used, $6,000.00 "bargain"!

If you purchased a batch freezer from Electro-Freeze any time during the past 23 years, it was manufactured at Emery Thompson’s factory but to Electro-Freeze’s specifications and standards.

NSF and UL approved Emery Thompson machines have a Blue and Silver label but may be as old as 17 years.  If you purchase a new Emery Thompson, we are able to provide you with answers to all your technical questions. But if you buy a used machine, we have no idea how that machine was used (or misused) by the original owner. For that reason, our ability to answer your technical questions about used machinery may be limited. Therefore, if you buy used, please be sure that the seller will teach you how to install, run and maintain your purchase.

If the front EMERY THOMPSON name plate is black and silver, it was built before 1996 and contains 5% lead. This metal, called dairy metal was the standard of the dairy industry but was banned in 1996. No health department in the USA or Canada will give you a permit to run this machine! Period. End of story.

If you must consider a used machine here is a simple rule:

Are you looking for a used Emery Thompson Batch Freezer? Well, you're not alone! Out of the 40 or more phone calls I take in a given day, 15 of them are looking at used. At any given moment there are over 80 used "other" batch freezers on eBay…but no Emery Thompson’s. Well, to be fair there are three used ET’s up there  but they’re older than me! Emery Thompson is the most sought after batch freezer in the world!

Personally I think starting up or running a business with someone else’s worn out machine is a terrible business error. What is more important to your business investment then the one machine that makes the product that you sell? If it goes down…what then? Or even worse - you spend many $Thousands$ to buy and safely deliver your "bargain" used batch freezer, make repairs if necessary, get it installed and ready to go - only to lose your entire investment of blood, sweat and cash because the Health Department refuses to allow you to use it. Ever. Did the guy who sold it to you  mention (did he even know??) that his machine was built before 1996 and could NEVER be approved for use! Why?
READ ON....